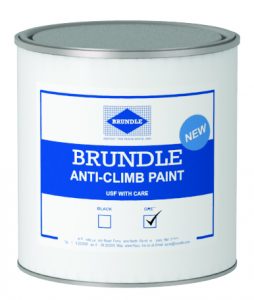 It’s something everyone worries about, and everyone wants to prevent.

Burglary costs British homeowners hundreds of millions of pounds a year – there were 417,000 in 2018-19 alone, costing an average of £3,000 each – and causes a level of stress and upset it’s impossible to put a price on.

Understandably, that’s produced a whole industry for high-tech solutions designed to stop thieves in their tracks.

But while sensors, cameras, and state-of-the-art electronic locks can be very effective, so can a much older, simpler solution – anti-climb paint.

Anti-climb paint does what it says on the tin. It’s a paint you apply to key areas around your property to make it much more difficult for would-be intruders to gain entry.

It’s non-toxic, petroleum-based – and, crucially, it doesn’t set. That means it’s permanently slippery, making it virtually impossible for thieves to scale walls, fences, roofs and any other surface it’s applied to.

Walls, roofs, drainpipes, guttering, ledges, lamp-posts, and CCTV camera poles are all prime places to use anti-climb paint. Burglars are nothing if not adaptable, and they’ll use any surface they can to gain access to a property.

To be effective, anti-climb paint has to be applied quite thickly – a layer that’s 2-3mm thick is best.

It’s non-toxic, so it won’t hurt anyone who comes into contact with it – and the same goes for animals, too. However, if you have pets, be wary – cats in particular are natural climbers, and if they come into contact with it, it’ll take a lot of washing to get it out of their fur.

When using something like anti-climb paint, however, you have legal obligations you need to be aware of.

Under the Occupiers Liability Act of 1984, homeowners have a duty of care towards people on their property – even if they’ve come uninvited.

That means you have to take reasonable steps to ensure that even intruders aren’t harmed while in your home and garden – and while anti-climb paint itself isn’t harmful, there’s obviously potential for someone to try and scale a wall, get caught out by the paint and fall and hurt themselves.

You’re fulfilling your legal responsibilities if you put up clearly visible signs warning would-be intruders that there’s anti-climb paint on the property.

That way, if they still try and gain access and injure themselves in the process, they do so at their own risk.

How long does it last?

Quality anti-climb paint isn’t affected by weather and shifting temperatures, and can last up to three years between applications!

At F.H. Brundle, we’ve been serving the trade for 130 years – if you’d like to know more about our anti-climb coatings, or any of our thousands of other products, don’t hesitate to get in touch. Call 01708398048 or email [email protected] today!